An organization called ‘Just One Day‘ is asking shelters across the USA to stop killing and instead embrace the 300 million citizens of the USA who would like them to do so. Even if it is for Just One Day.

A day is 24 hours. A day is how we measure how much time we spend at work. A day can be something we look forward to, a celebration of some kind. But in U.S. animal shelters, a day represents 10,411 lives needlessly lost.

We are asking animal shelters across the USA to take a pledge not to kill any savable animals on June 11, 2012. For Just One Day, “Euthanasia Technicians” will put down their syringes and pick up cameras. Instead of injecting animals with lethal doses of sodium pentobarbital, they will photograph them and post them on the Internet, on Facebook, on Twitter. On June 11, 2012, they will market their animals to the public, they will reach out to rescue groups, they will host adoption events with discounted rates, they will stay open for extended hours, and they will ask their communities to help them empty the shelter the good way.

Instead of going into body bags in freezers, the animals will go out the front door in the loving arms of families. At the end of the day, the shelters will be emptier than when the day started. And, no one will have had to die in order to make that happen. To help them succeed, the No Kill Advocacy Center and Animal Wise Radio are teaming up to offer shelters the tools they need to be successful.

On average, if each animal shelter in the USA adopted out or transferred to rescue groups an extra three animals on June 11, the USA can become a no kill nation. And if we can do it then, we can also do it on June 12 for Just Another Day. . .

We wish them the best of luck! 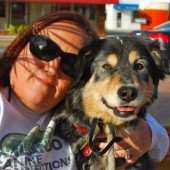 Mali and Rainey Elf Yourself

When Do You Become Liable for Your Dog’s Actions?